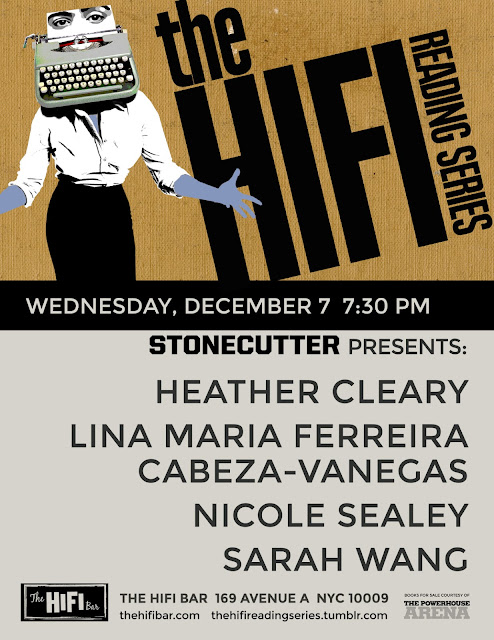 We're teaming up with the good people at the HiFi Reading Series to present an evening of readings with four of our incredible contributors: Heather Cleary, Lina Maria Ferreira Cabeza-Vanegas, Nicole Sealey, and Sarah Wang. RSVP here.

HEATHER CLEARY's translations include Sergio Chejfec’s The Planets (finalist, Best Translated Book Award 2013) and The Dark (nominee, National Translation Award 2014), and a selection of Oliverio Girondo’s poetry for New Directions. She holds a PhD from Columbia University and was a judge for the BTBA and the PEN Translation Award. She is a founding member of the Cedilla & Co. translators’ collective and a founding editor of the digital, bilingual Buenos Aires Review.

LINA MARIA FERREIRA CABEZA-VANEGAS graduated with both a creative nonfiction writing and a literary translation MFA from the University of Iowa. She is the author of “Drown Sever Sing” from Anomalous press and the forthcoming collection of short stories, translation and essays titled Don’t Come Back, from Mad River Books, an imprint of the Ohio State University Press. Her fiction, nonfiction and translation work has been featured in journals including The Bellingham Review, The Chicago Review, Fourth Genre, Brevity and the Sunday Rumpus. She is a Rona Jaffe fellow and won the Best of the Net and the Iron Horse Review’s Discovered Voices Award, and has been nominated for two Pushcart Prizes. She recently moved from China to Columbus where she works as a visiting assistant professor for The Ohio State University.

Born in St. Thomas, U.S.V.I. and raised in Apopka, Florida, NICOLE SEALEY is the author of The Animal After Whom Other Animals Are Named, winner of the 2015 Drinking Gourd Chapbook Poetry Prize. Her other honors include an Elizabeth George Foundation Grant, the Stanley Kunitz Memorial Prize from The American Poetry Review, a Daniel Varoujan Award and the Poetry International Prize, as well as fellowships from CantoMundo, Cave Canem, MacDowell Colony and the Poetry Project. Her work has appeared in The New Yorker and elsewhere. Nicole holds an MLA in Africana Studies from the University of South Florida and an MFA in creative writing from New York University. She is the Programs Director at Cave Canem Foundation.

SARAH WANG is a writer based in New York. In 2016 she was awarded a Chicago Tribune Nelson Algren Literary Award runner-up prize, and is a former resident at the Kimmel Harding Nelson Center for the Arts. She has written for The Last Newspaper at the New Museum of Contemporary Art; semiotext(e)'s Animal Shelter; The Los Angeles Review of Books; Conjunctions; Stonecutter Journal; Story Magazine; The Third Rail, and Black Clock, among others.

STONECUTTER is an annual print journal of art and literature that features international artists and writers of all genres alongside US-based ones.

ABOUT THE HIFI READING SERIES:

Every month, the HiFi Reading Series features a selection of up-and-coming writers curated by an established author. Our readings have been featured in the New Yorker and the New York Observer, and TimeOut New York named HiFi one of the “Coolest Reading Series in NYC.”

The HiFi Reading Series is hosted and produced by Ryan Britt and Lena Valencia in partnership with the HiFi Bar.

For more information, contact hifireadingseries@gmail.com
Posted by Stonecutter at 11:38 AM